Diagnosing hematologic malignancies still relies on the subjectivesual assessment of images by cytologists and pathologists. Theseerts are confronted with an ever increasing amount of hugedata sets, rare diagnostic cells, and heterogeneous diseasemanifestations. Despite the large amount of available patient data,deep learning algorithms, and our profound knowledge on how the bloodystem works, there is currently no model to automatically analyze andpredict disease dynamics from a blood smear or bone marrow puncture.In my talk, I will discuss the tremendous progress in computer visiond artificial intelligence to address this biomedical challenge atthe interface of digital pathology, machine learning, computer vision,and mathematical modelling. 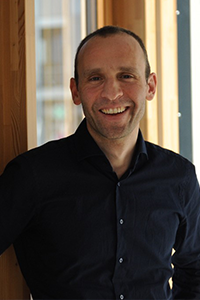 Director of the Institute of AI for Health

Carsten Marr received his diploma in general physics from the Technische Universität München in 2002. He wrote his thesis at the Max-Planck-Institute for Quantum Optics (Garching, Germany) and visited the Quantum Information and Quantum Optics Theory Group at Imperial College (London, UK) in 2003. In 2004, he received a PhD fellowship from the Technische Universität Darmstadt and joined the Bioinformatics Group there, working on dynamical processes on graphs and biological networks. He visited the Center for Complex Systems and Brain Sciences (Florida Atlantic University, USA) and Jacobs University Bremen (Germany) during his PhD. He received his PhD from Technische Universität Darmstadt in June 2007 and joined Jacobs University Bremen as a postdoctoral fellow, focusing on gene regulatory networks. In 2008 he joined the Helmholtz Zentrum München as a PostDoc in the Institute for Bioinformatics and Systems Biology working on the quantification, analysis, and modelling of stem cell data. In 2011, he worked on pluripotency and stochastic descriptions of gene expression at the University of Edinburgh with a stipend from the Deutsche Forschungsgemeinschaft DFG. He became deputy director and group leader at the Institute of Computational Biology in 2013. In 2017, he received the Erwin-Schrödinger Prize and the CSB2 Prize in Systems Biology for his interdisciplinary contributions to the quantification of single blood stem cells. In 2019, he received an ERC Consolidator Grant for establishing Computational Hematopathology. Since 2021 he is director of the Institute of AI for Health (AIH) at Helmholtz Munich.