I will discuss some challenges in modeling  3D images for biomedical applications. I’ll talk about representations of shapes, what properties we would like them to have, what tasks we use them for and how to match representations to tasks. I will discuss in some detail two representations the Euler Characteristic Transform and the Lifted Euler Characteristic Transform that can be used in practice for statistical analysis of shape and field data. The talk will blend mathematical, statistical/machine learning, and biological challenges with some solutions. Regression using shapes will be discussed, as will the problem of sub-shape selection. Some evolutionary modeling with shapes will also be discussed. 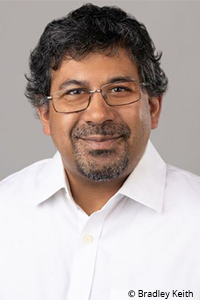 Prof. Dr. Sayan Mukherjee, born in India, received his academic training in the USA. In 2001, he received his PhD from MIT, Cambridge, USA, and initially remained there and at the nearby Broad Institute on a Sloan Postdoctoral Fellowship. Since 2004 he has been at Duke University, Durham, USA; since 2015 as Full Professor. In this, he has been consistently associated with several departments as Professor of Mathematics, Applied Statistics, and Computer Science. In 2011, he spent a year as a visiting scholar in Chicago. In 2008, he received a Young Researcher Award from the International Indian Statistical Association, and since 2018 he has been a Fellow of the Institute of Mathematical Statistics. He is also a member of several international professional societies and is now Humboldt Professor at Leipzig University.